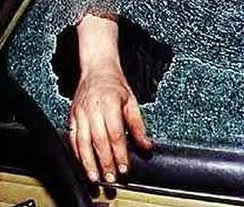 A local man notified the police that on the night of April 4 he parked and locked his car in one of the Kassai Street parking lots and he found only broken glass on the site next morning.

The police found out that the car was more likely to be discovered on one of the local MEH depots (metal scrap depots). The police officers searched the depots and at the entrance of one of them they found a cctv camera. They analyzed the records and clearly identified the victim`s car which had been brought to the depot in 3 pieces on a truck. The officers found and seized the parts of the car and will use them as evidence. According to available information a 21-year-old man and his 42-years-old father stole the car and another two people were involved in selling it. During questioning, the suspects admitted having sold the car, but the father and his son denied the theft. In their testimonies they contradicted each other and confused the information several times. The two men had been convicted several times, several proceedings against them are still pending, and both are subject to a suspended prison sentence. The Debrecen Municipal Court ordered a pre-trial detention.